Sunday October 25th Sun Boxes, CUBEMUSIC and Ladybug Cathedral will be on the green of the Momentary as part of their Sunday Reset series. There will also be two of my Yoga friends teaching classes. 7:30am-7:00pm.

Suzie Atkin and Catalina Carvajal will be on the green teaching yoga. It’s all free and you can sign up here

Sun Boxes is comprised of twenty speakers operating independently, each powered by the sun via solar panels.  There is a different loop set to play a guitar note in each box continuously.  These guitar notes collectively make a Bb chord.  Because the lops are different in length, once the piece begins they continuously overlap and it slowly evolves over time.  The sounds of Sun Boxes has been described as both soothing and energizing.

CUBEMUISC 6 Aluminum Cubes that emit sound and light.  The piece transforms the space into a web of sound, light and shadows. If Sun Boxes were considered the daytime piece, CUBEMUSIC is definitely the nighttime piece. This is the second timne CUBEMUSIC has been outside.

Ladybug Cathedral was originally composed for the Delaware Art Museum as a 5 hour piece for bowed guitar.  The piece has evolved since and for The Momentary there will be 3 one hour sections played on the green.

February 3 and 4th I was in Boynton Beach talking to lots of great people. There were great artists only a few feet away.

Like my buddy Anthony Castronovo, who collaborated with the delightful Eleonora Nicoletti for Solar Shimmer.

Anthony and I even had some time to play a little pinball.

September 28, 2018 to November 2, 2018 CUBEMUSIC and INSTALL were presented at Quincy Art Center while Sun Boxes toured the city.

I met a ton of very cool people.

They even fed me great Italian Food.

Looking forward to my return to Quincy. 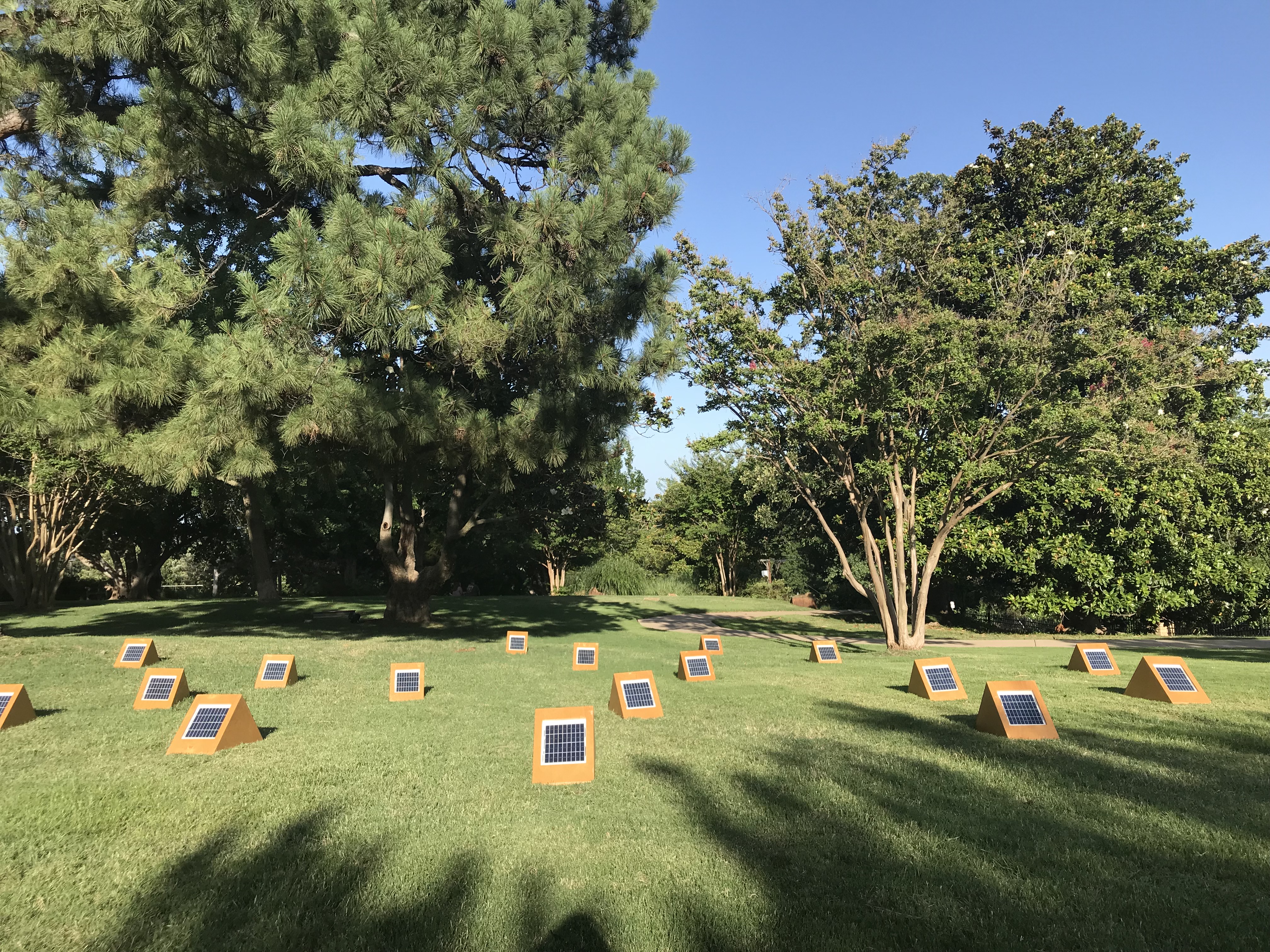 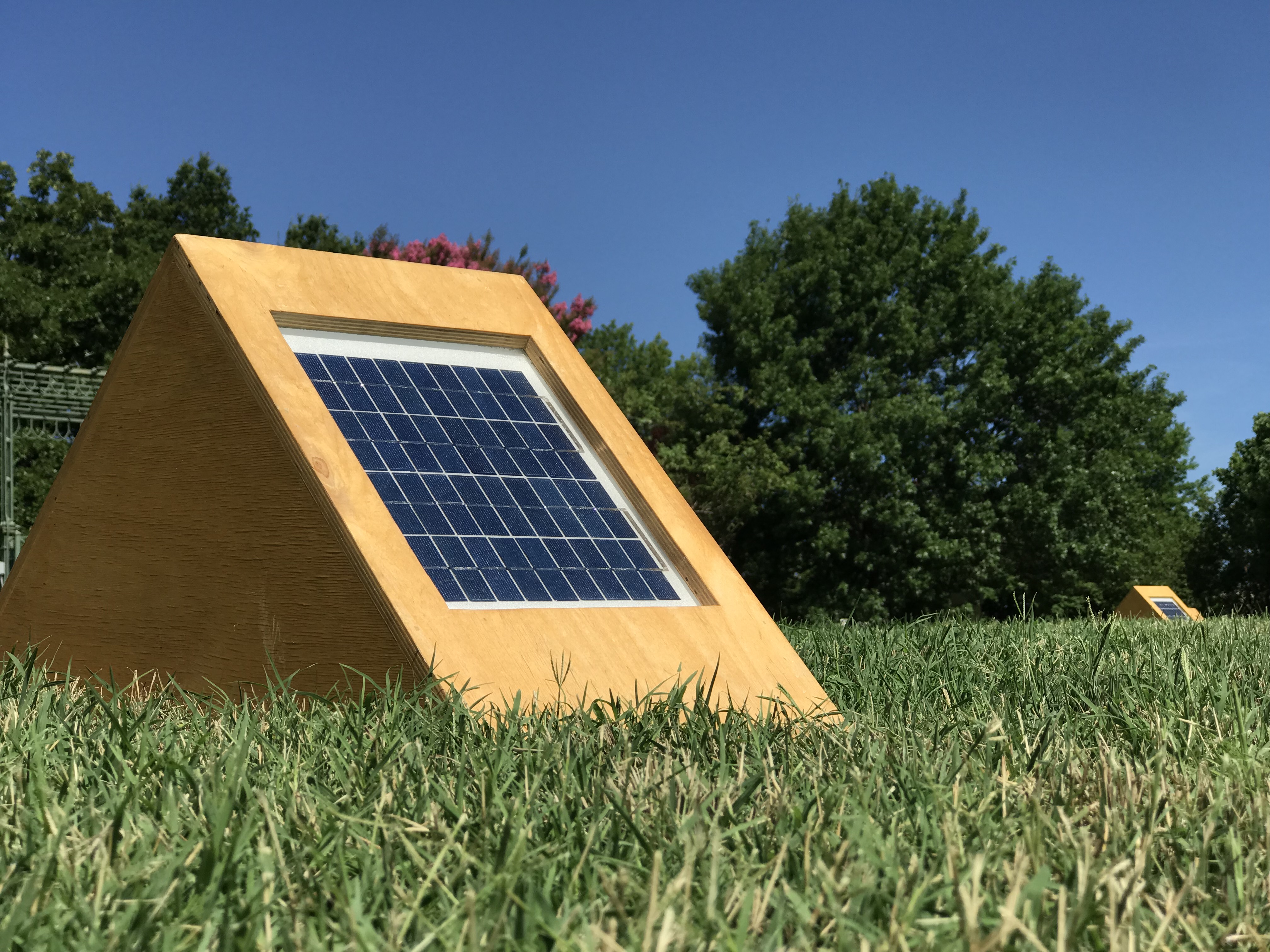 It was two great days filled with Sun. 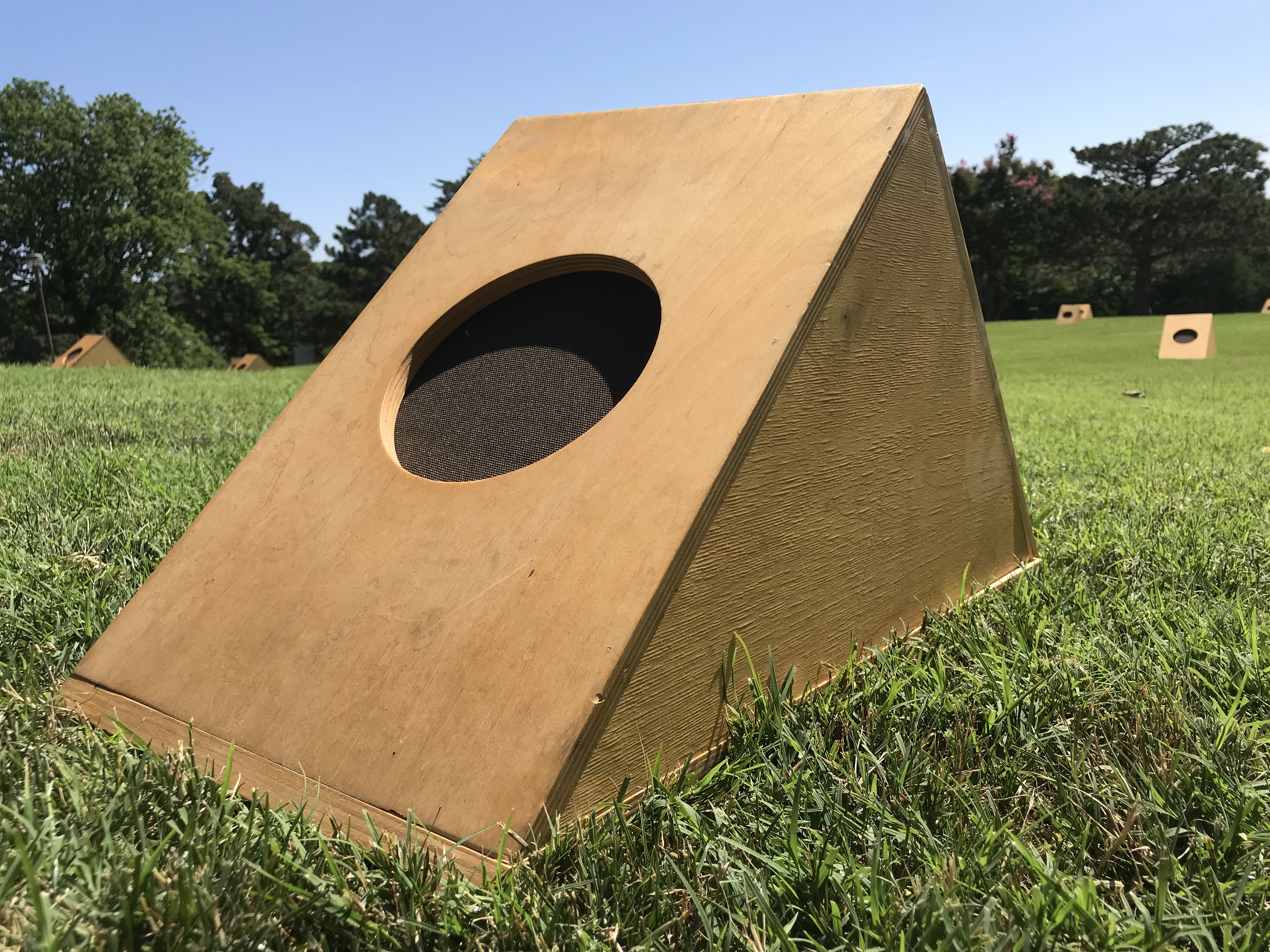 And Lots of very cool people. 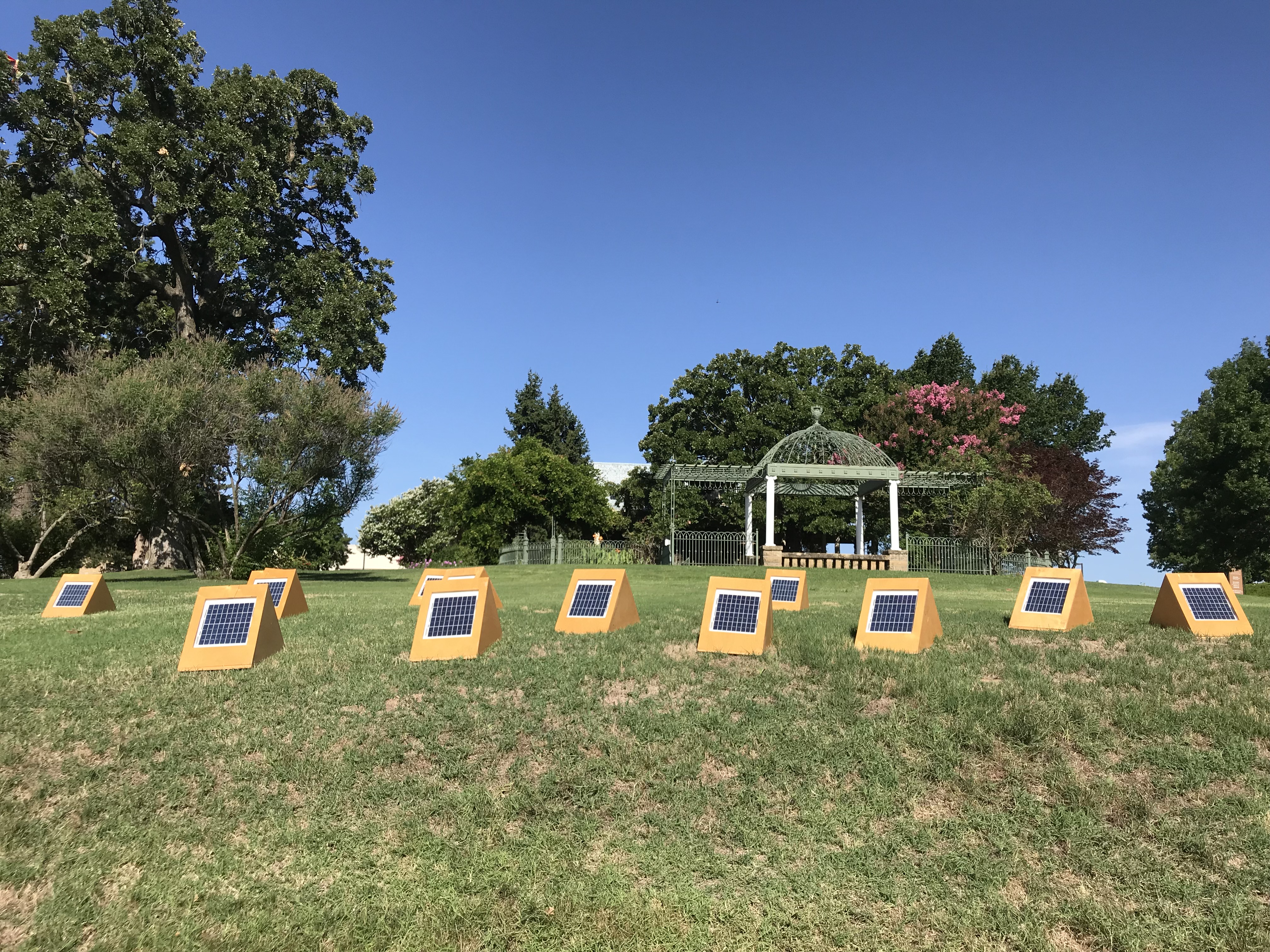 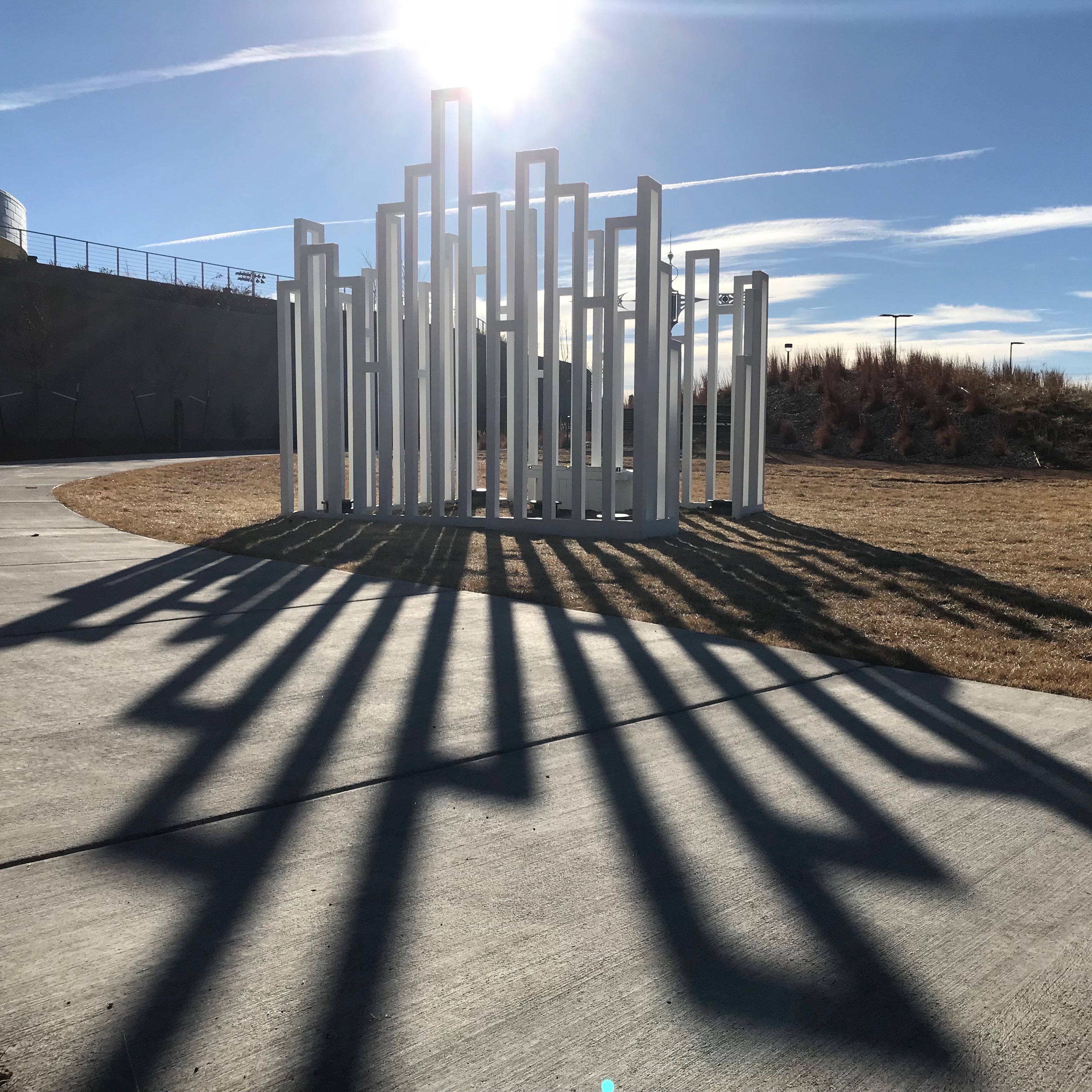 The latest incarnation of the Moon Phases series is The Moon Pod. 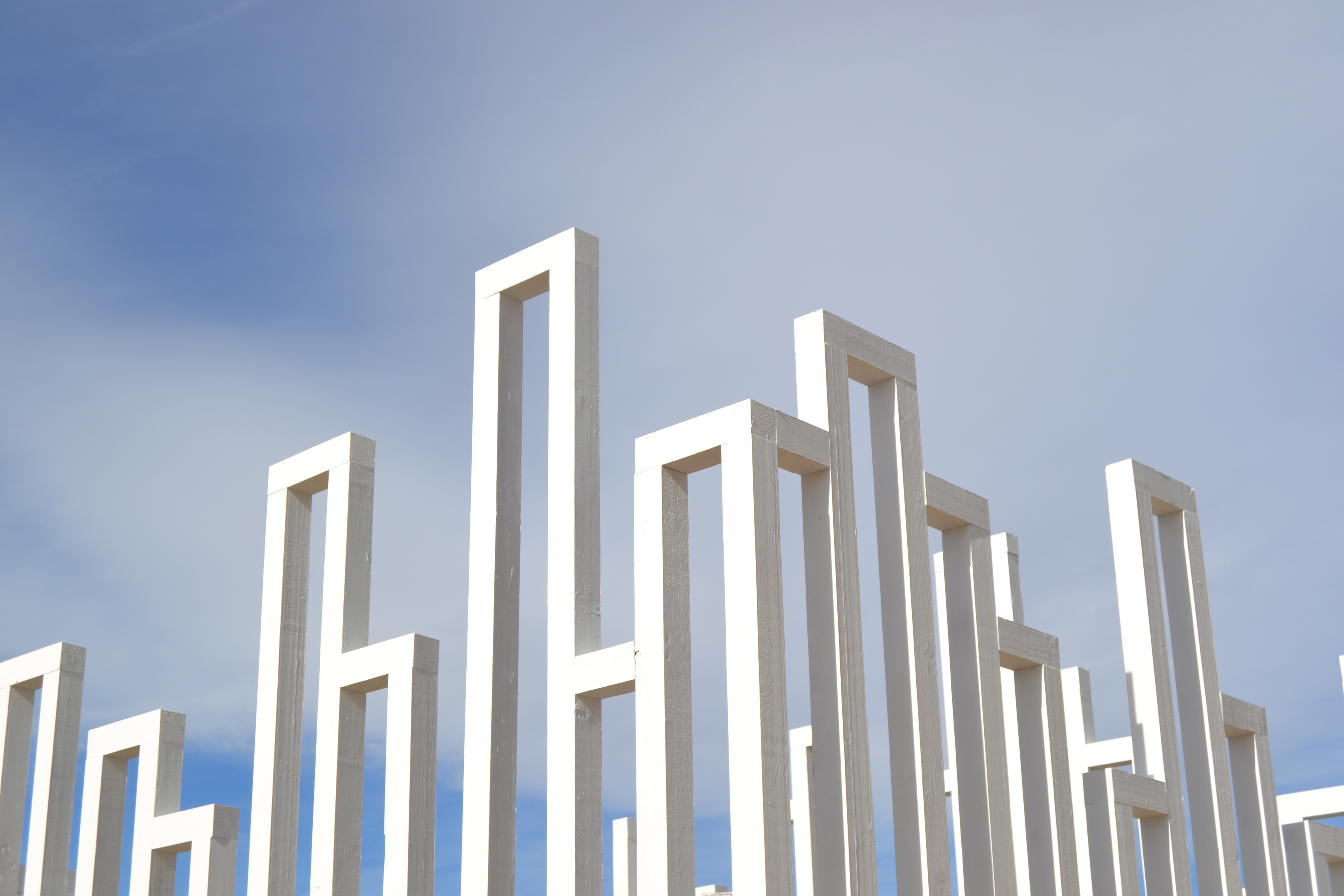 While the music plays in 29.53 day cycles;  two light sources cast distorted shadows of the structure.  Every 24 hours the Sun does its thing and every 29.53 the Moonn does. 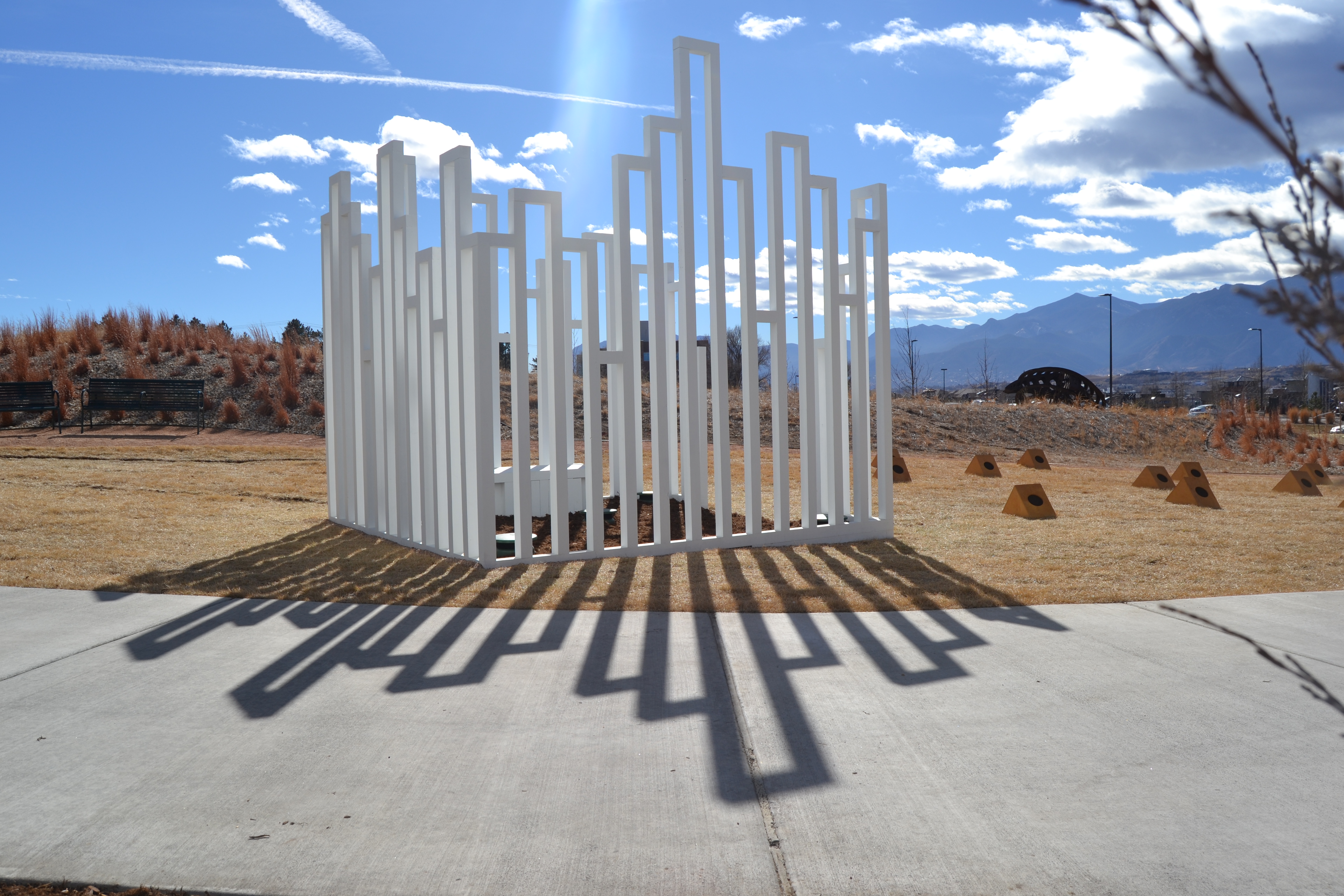 The Moon Pod will be on display outside the ENT Center For Art in Colrado Springs, CO. 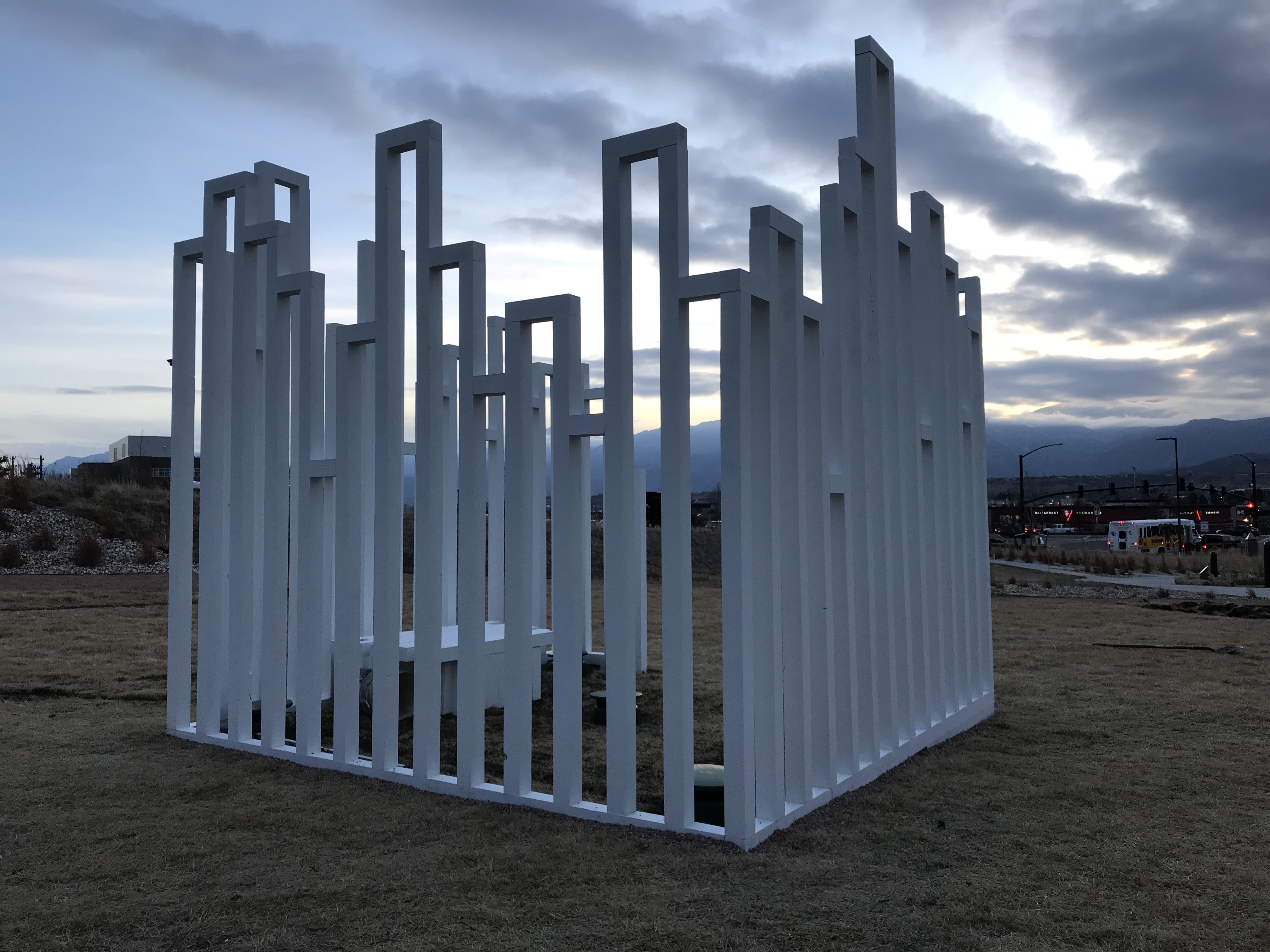 Brought here by GOCA arts as part of the AWOL program. 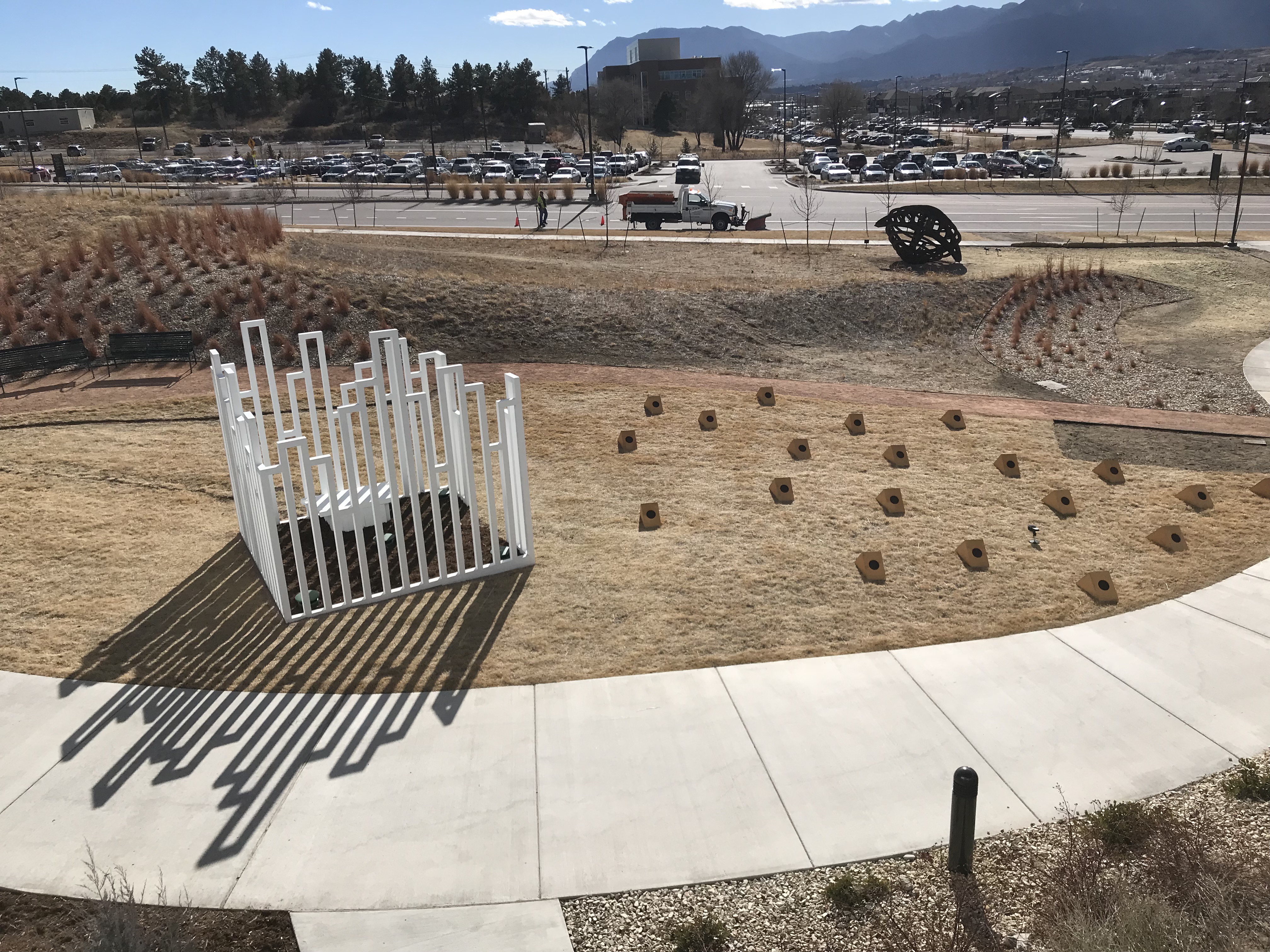 The Moon Pod will be up through December 2018.  Sun Boxes will be moving around campus for the rest of the semester.

Longtime collaborator Ryan Blessey came to Colorado Springs to help with the build and install.  This is some of what we did. 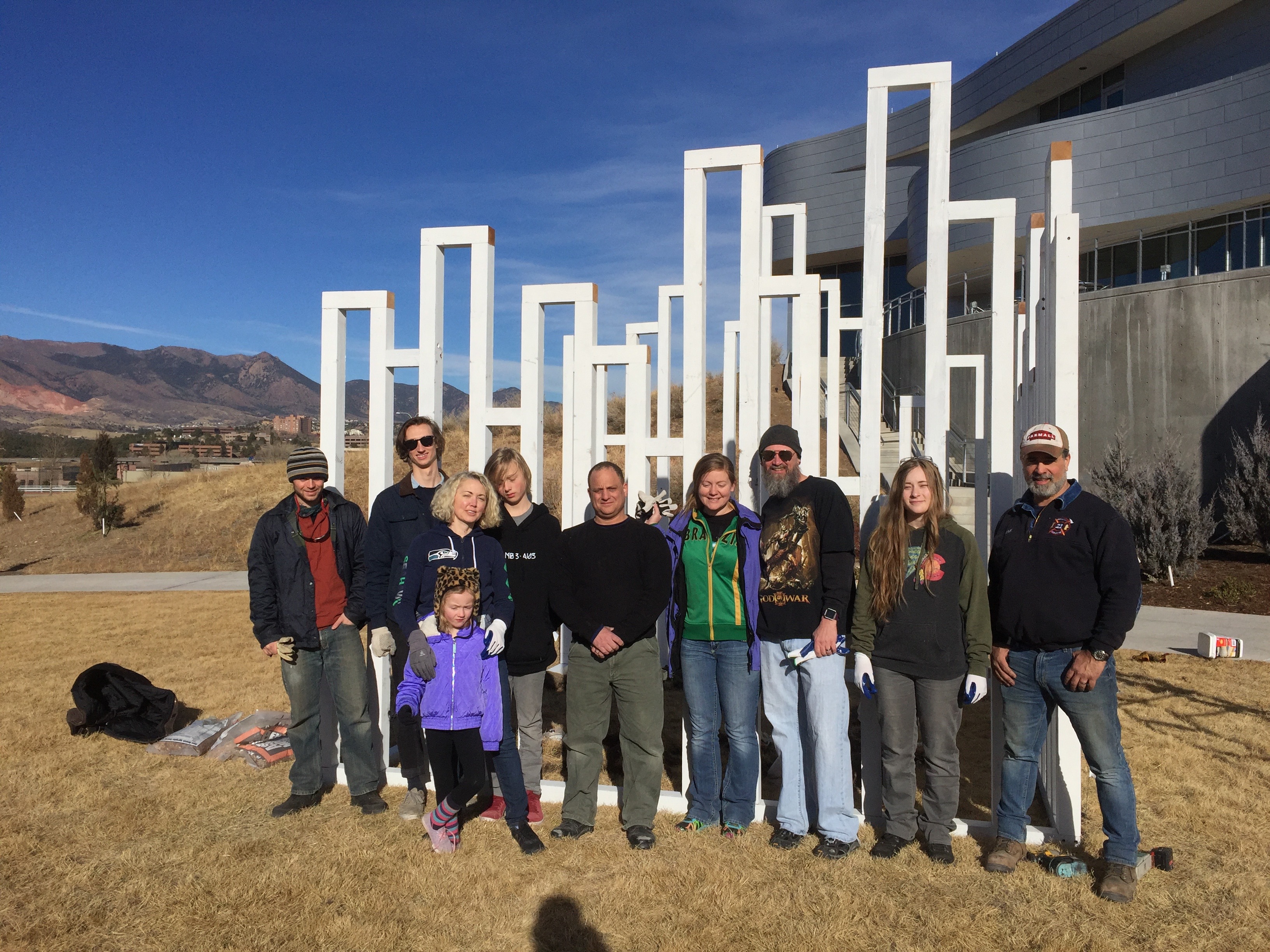 Sometimes it takes a village. 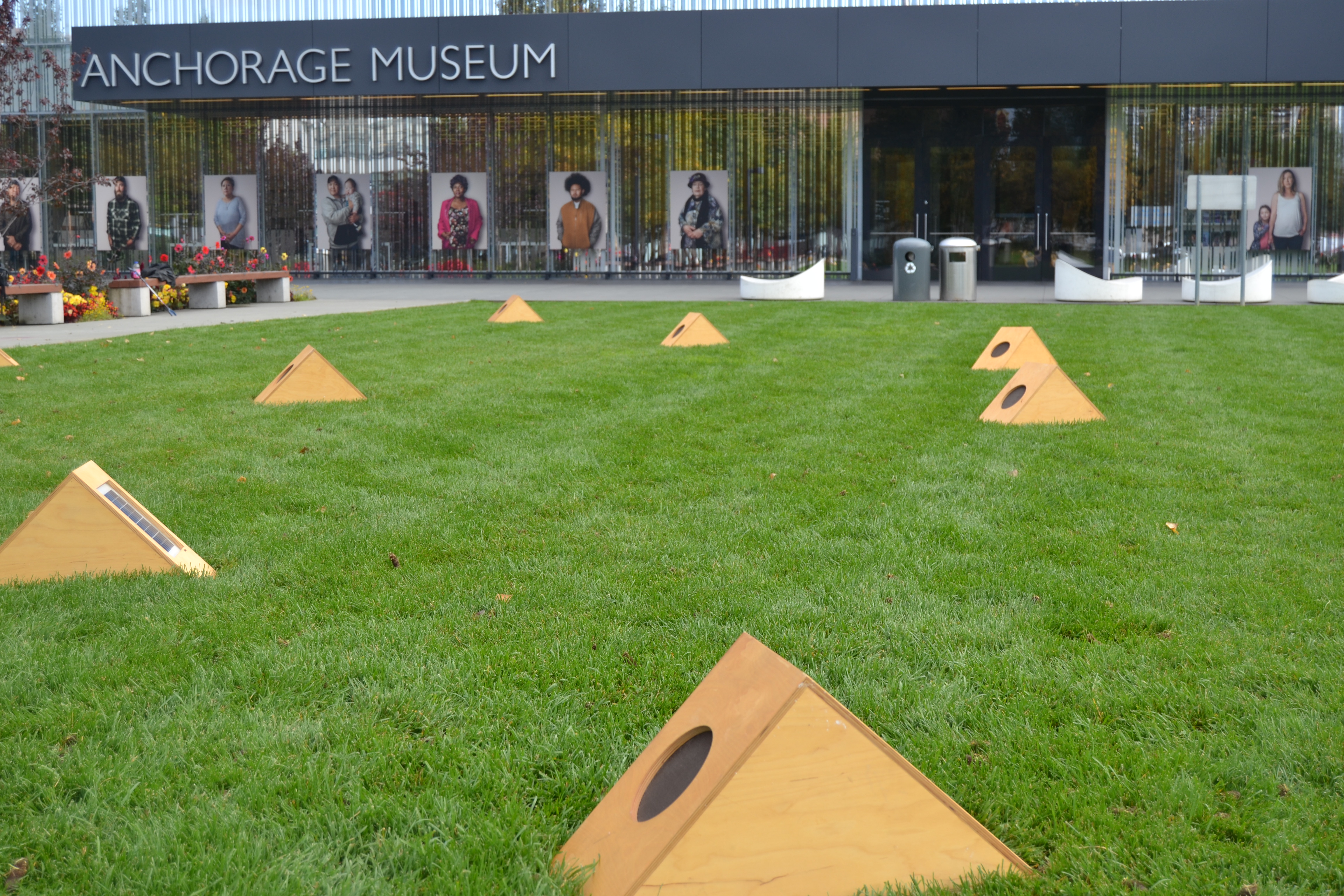 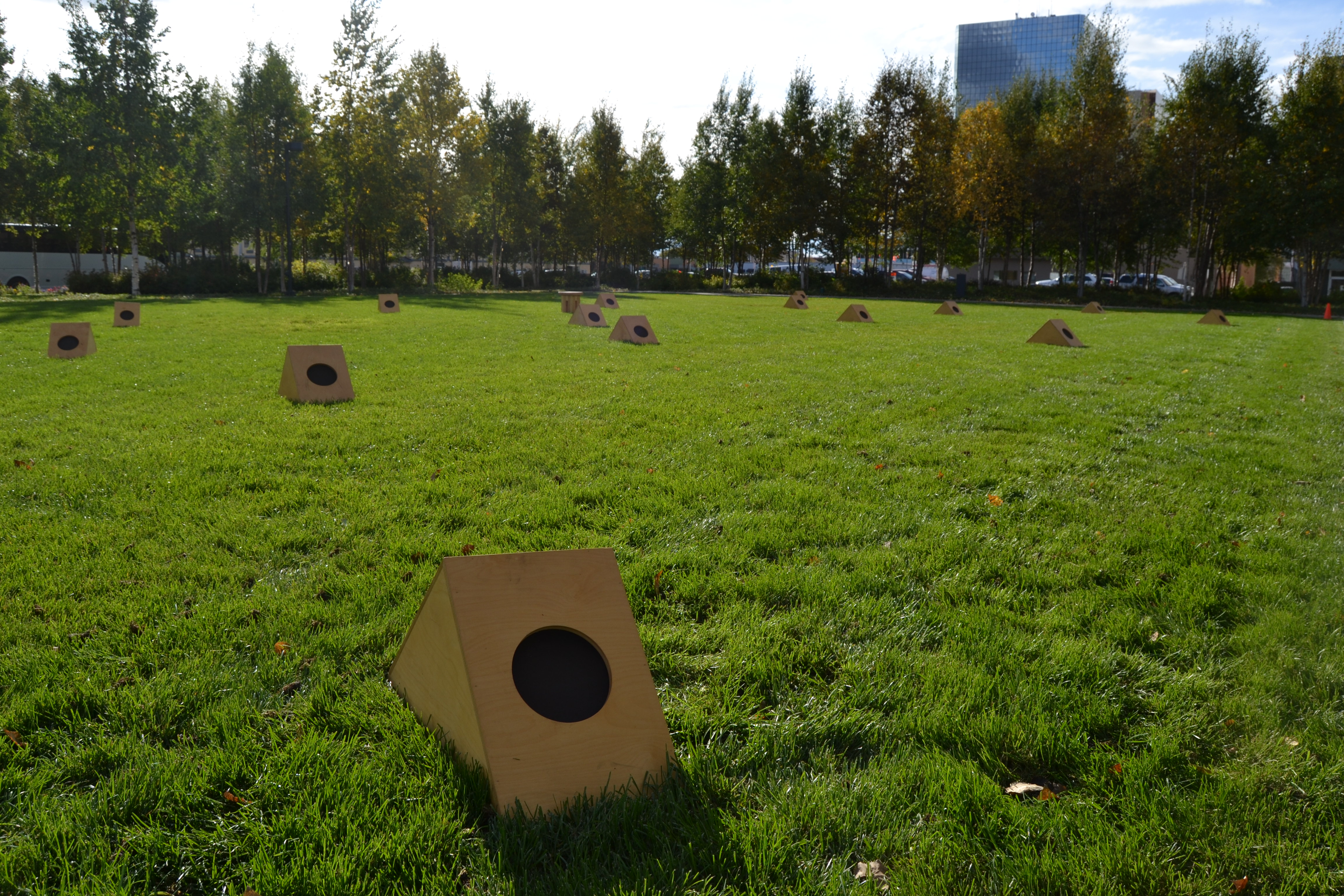 We met a ton of cool people. 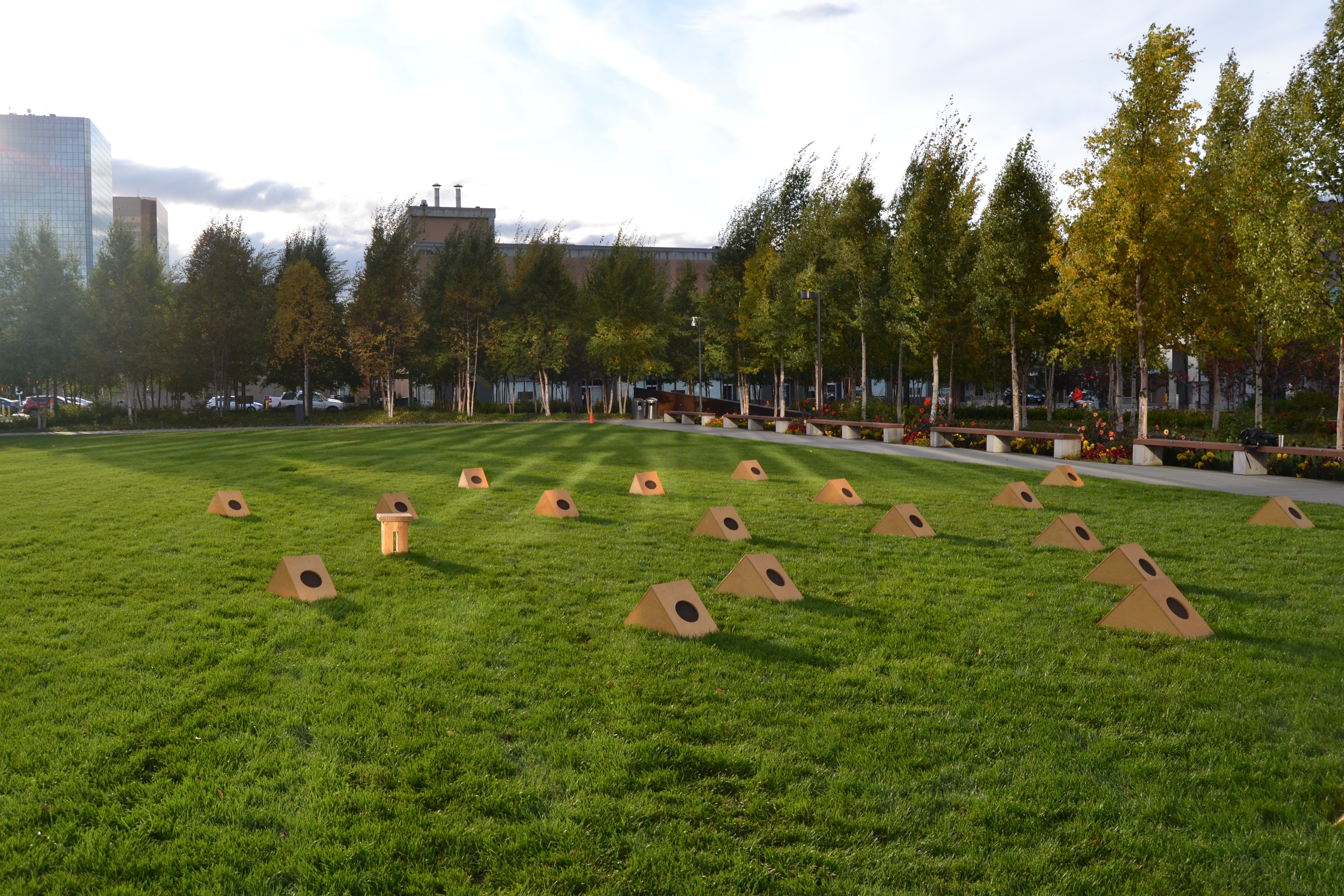 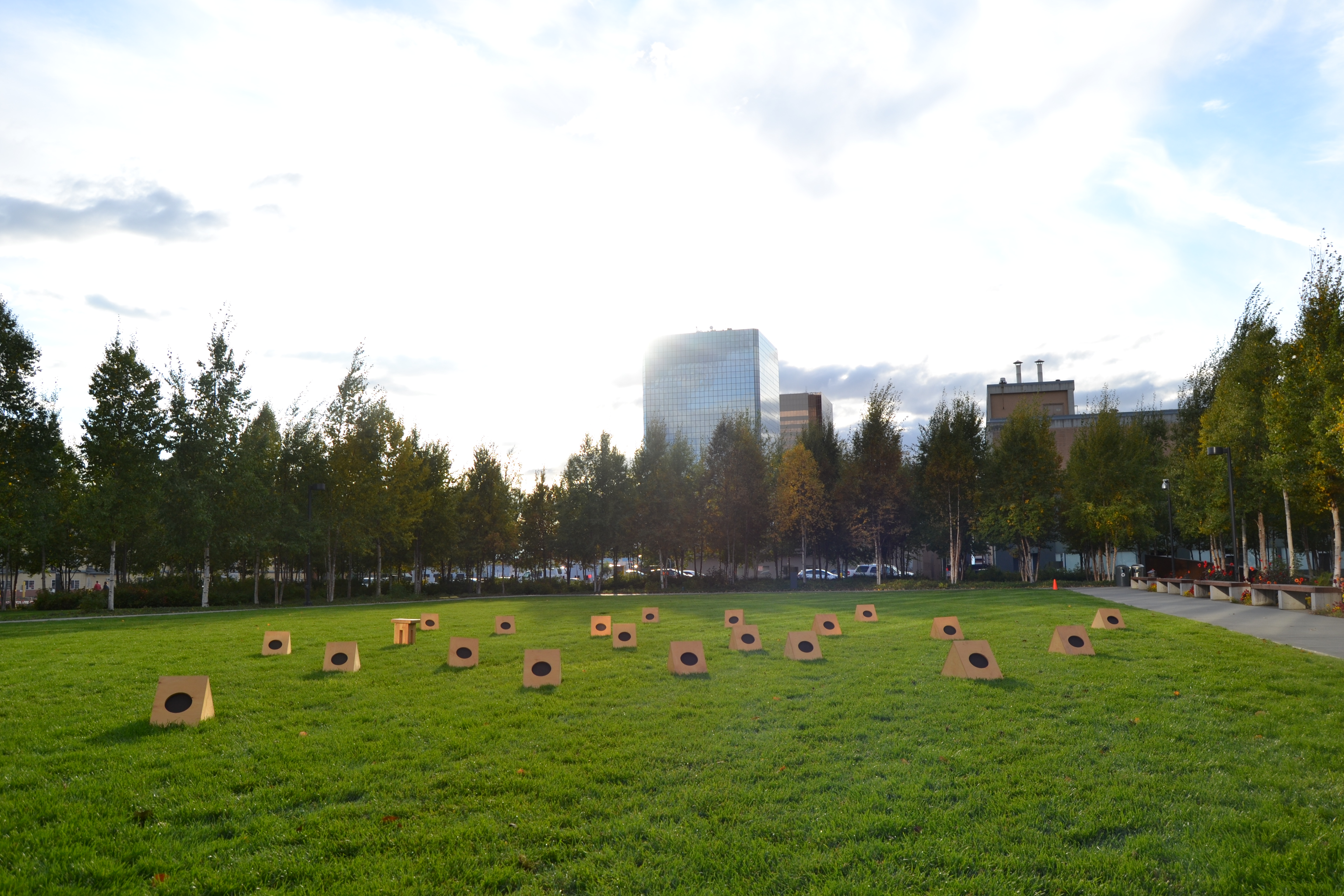 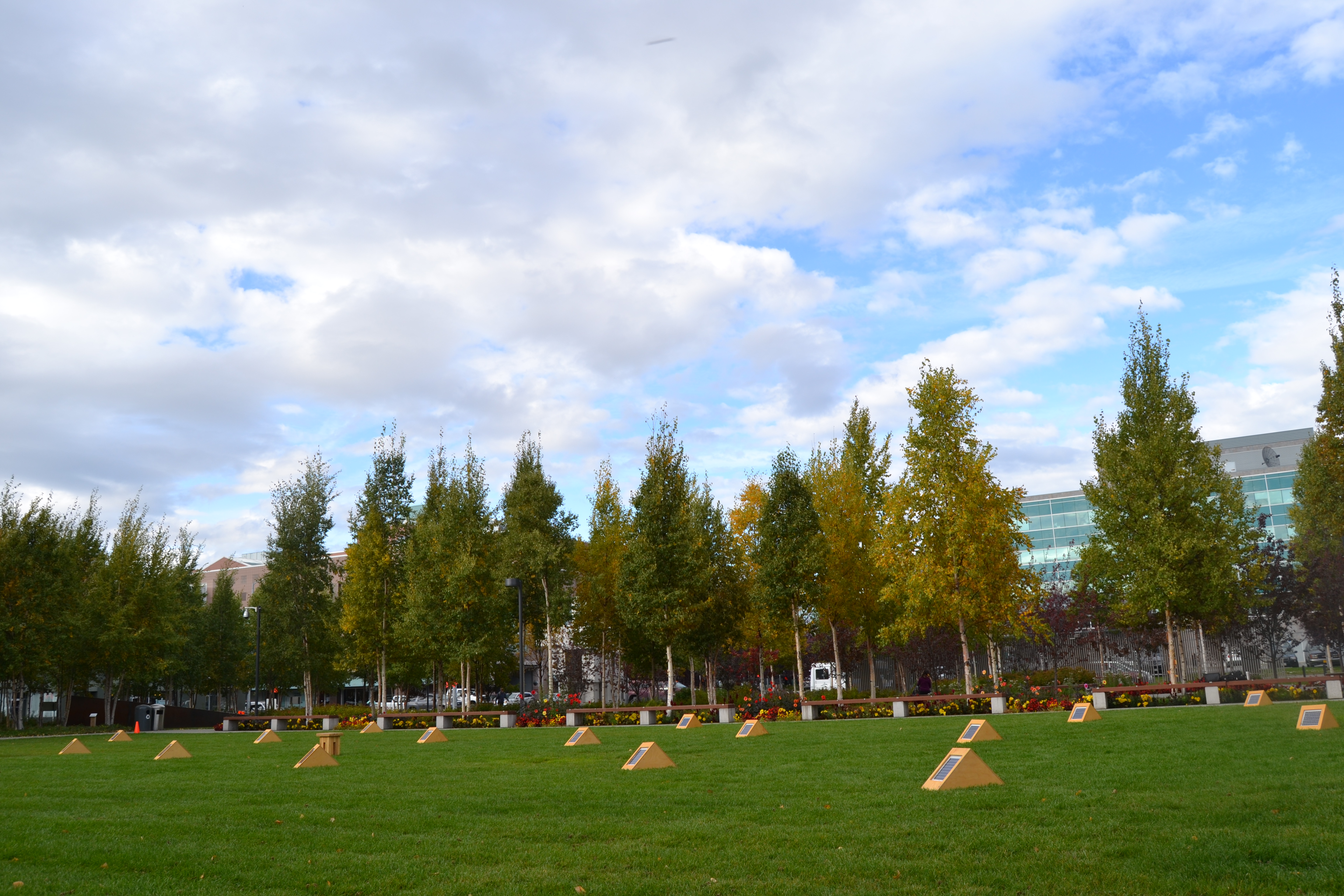 Consumed a lot of Thai Food. 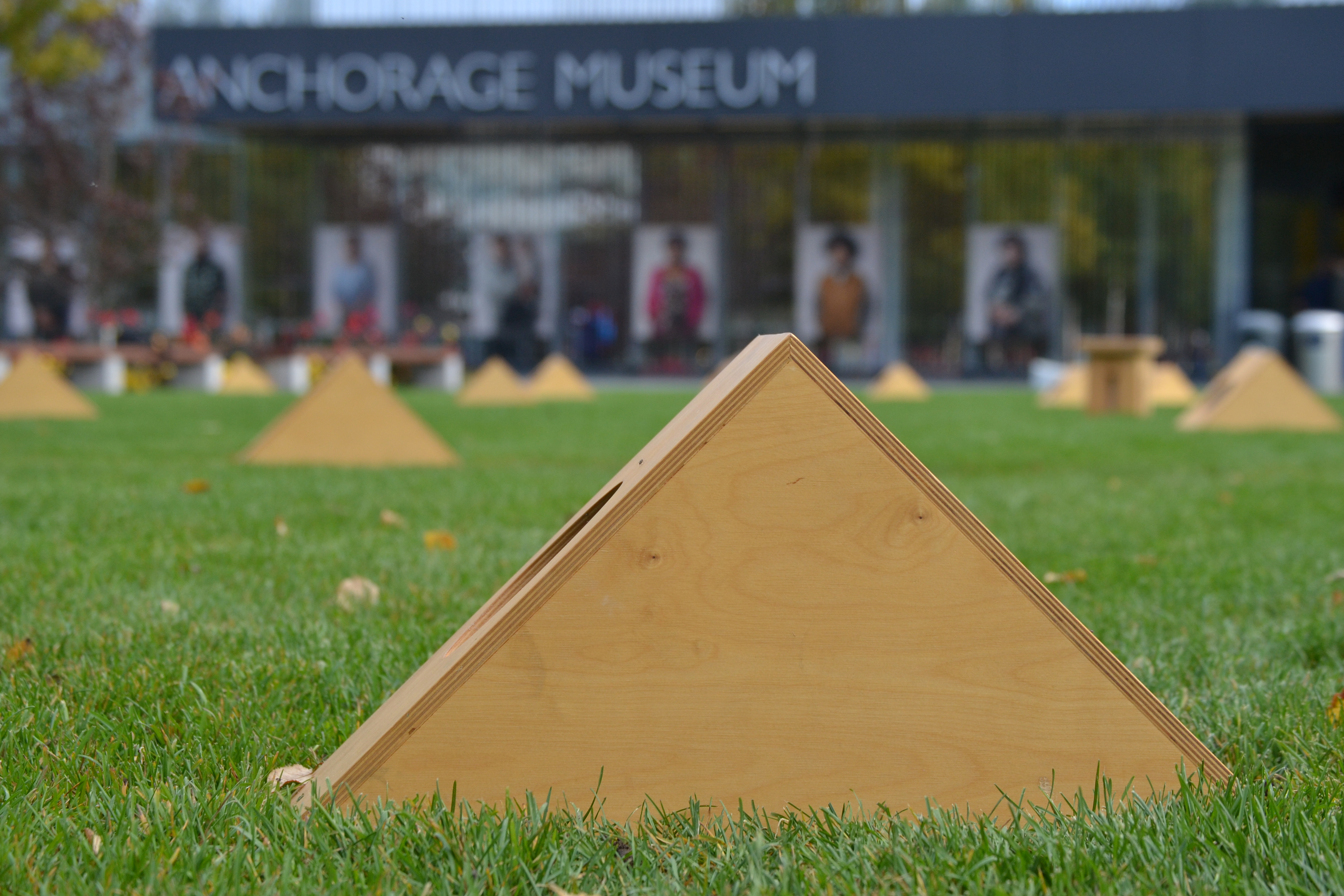 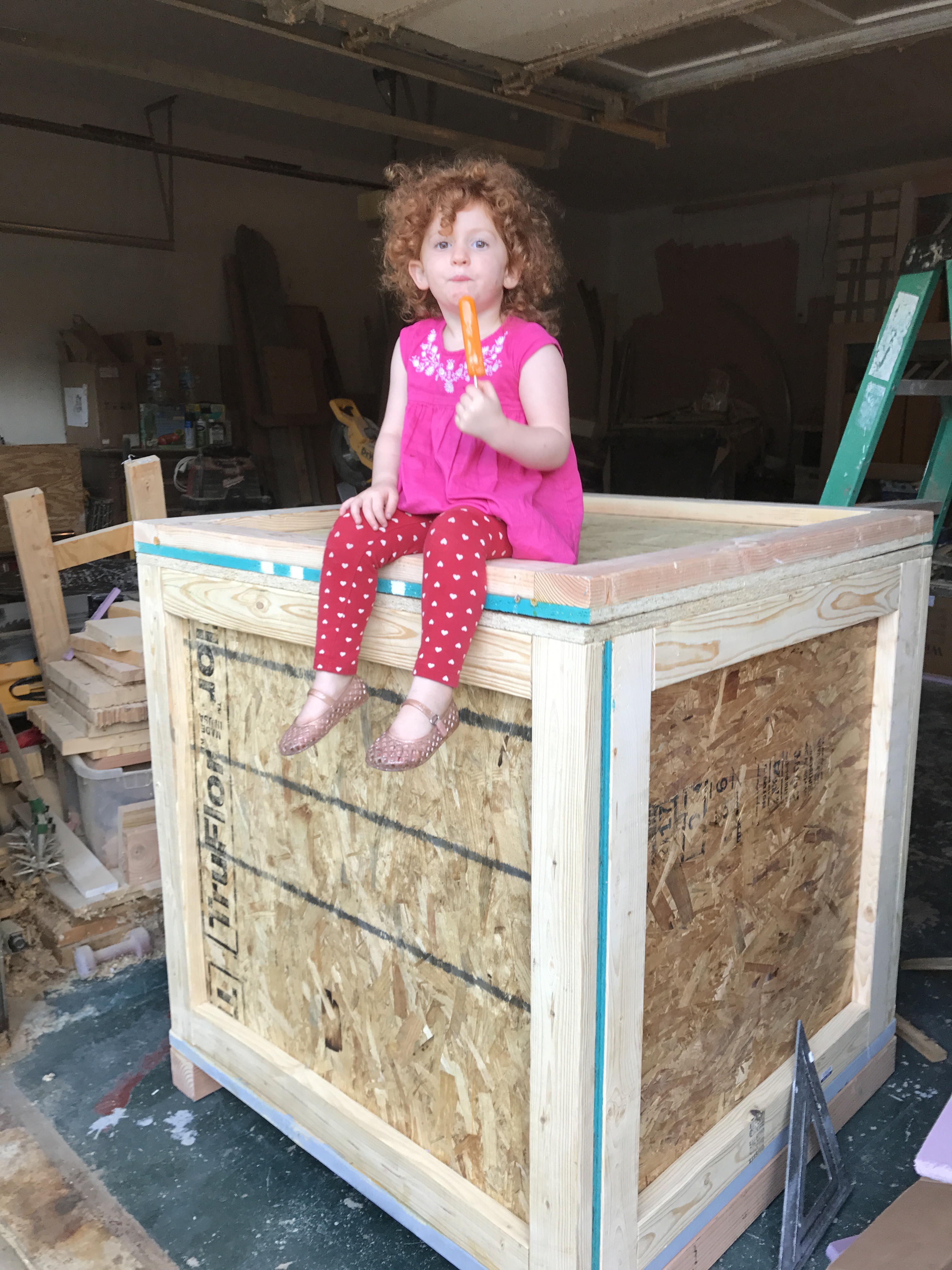 I even ate some Beet Ice cream. 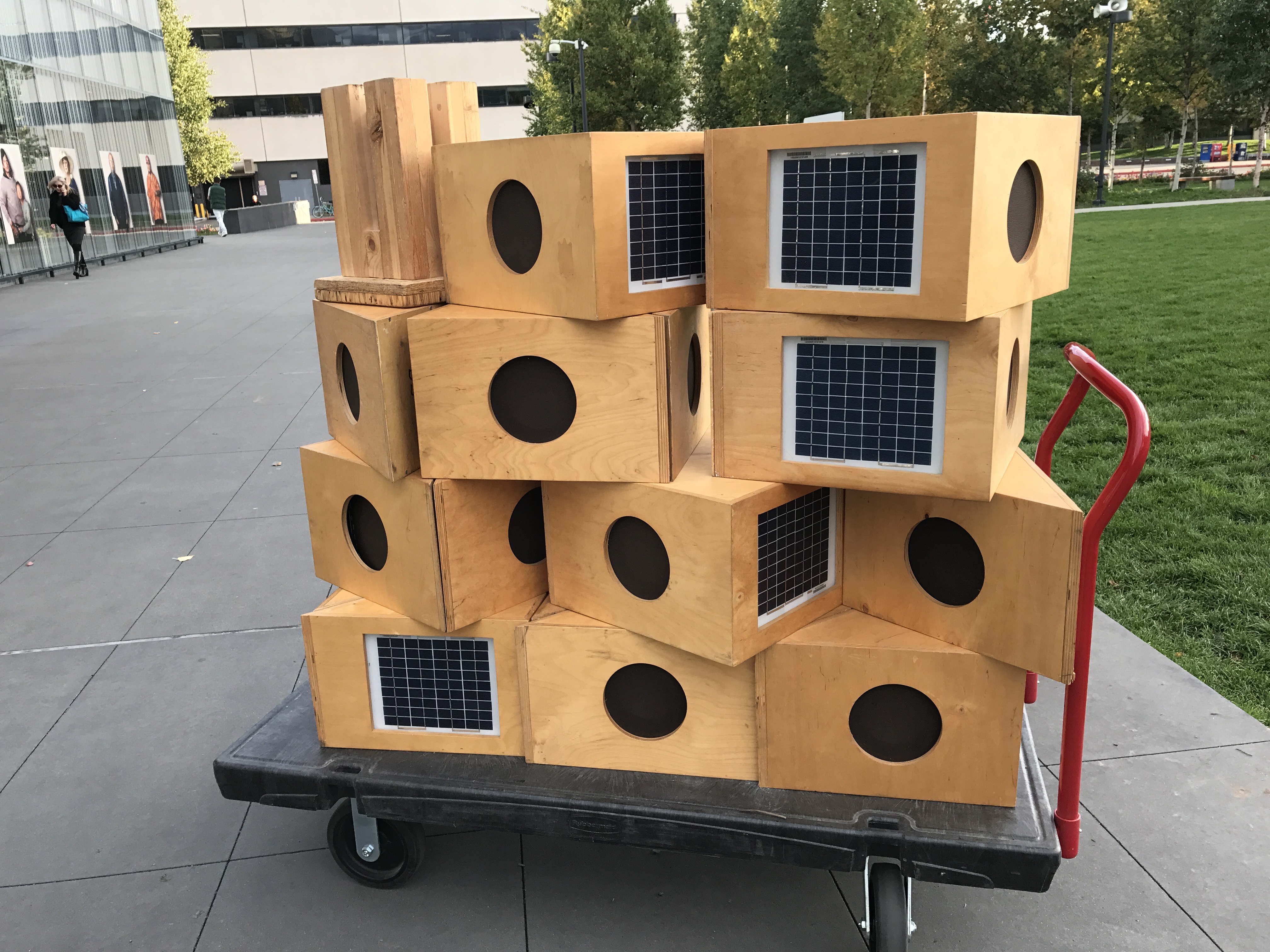 And saw a Sun Dog. 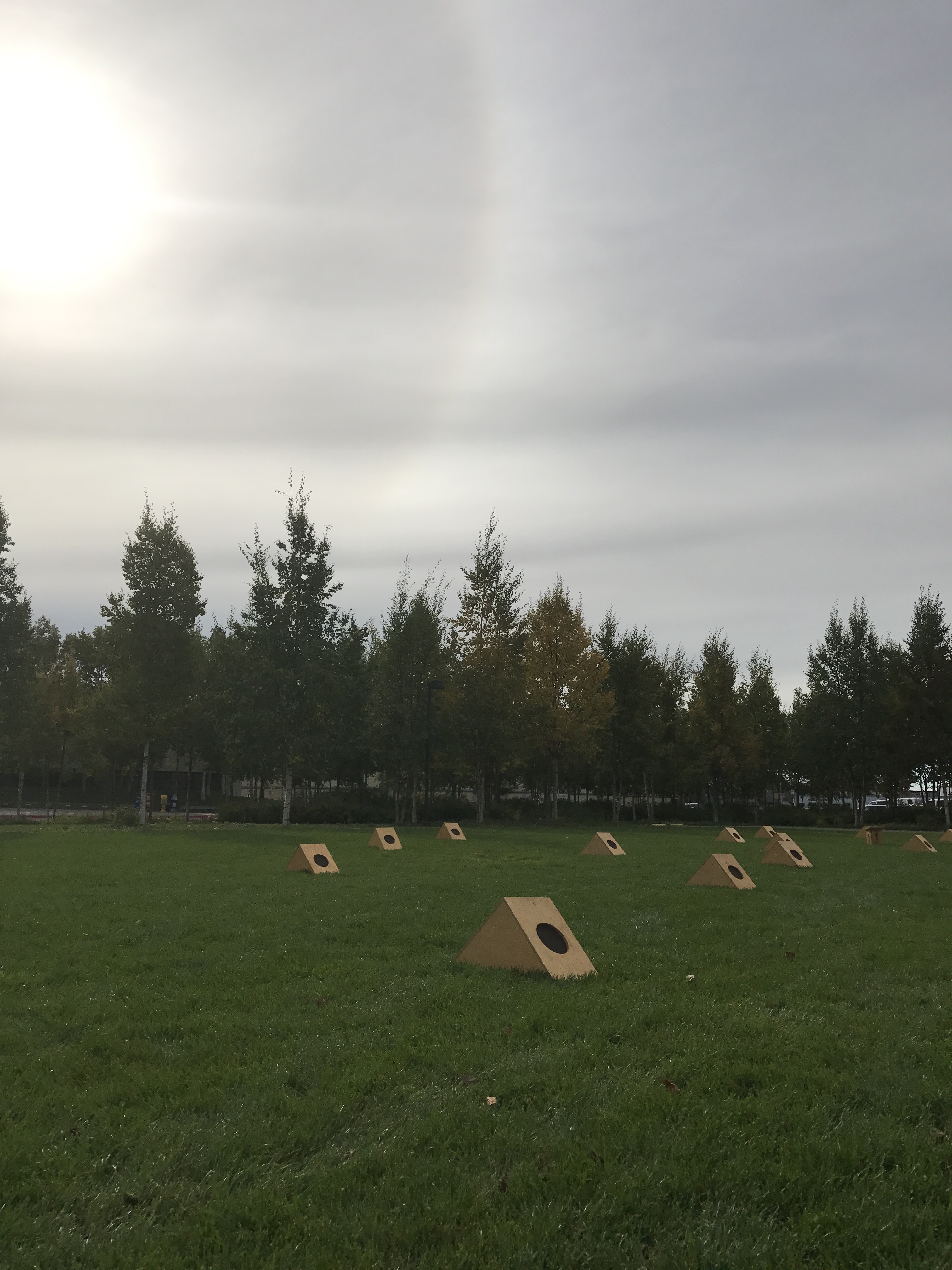 On August 21st 2017, there will be a total eclipse of the sun. This eclipse can be seen throughout the United States. The last time this happened was 1918. The next time will be 2024. A total eclipse is the result of the intersection of the Sun’s cycle and the Moon’s cycle; in the spirit of such an intersection, we’ve decided to create a piece that combines Sun Boxes and Moon Phases. It will begin at Dawn on August 21st and end at Dusk on August 21.

Sun Boxes is an environment to enter and exit at will. It’s comprised of twenty speakers operating independently, each powered by the sun via solar panels. There is a different loop set to play a guitar note in each box continuously. These guitar notes collectively make a Bb chord. Because the loops are different in length, once the piece begins they continually overlap and the piece slowly evolves over time.

The sounds of Sun Boxes have been described as both soothing and energizing. A unique combination of adjectives often used to describe yoga, or meditation. When experiencing the piece, Sun Boxes allows the participant to slow down, and notice the subtleties of the composition unfold. With the abundance of technology and hustle of this culture it is a much needed concept to not only be allowed, but also encouraged to slow down.

Moon Phases is a concept that plays music based on the fullness of the moon. Pre-Recorded guitar chord is programmed to grow more dense as the moon gets more full; creating a unique experience over time.

The music is a minimal guitar piece that drones in cycles, as constant and as hauntingly as the moon itself. The piece will begin in silence with the New Moon and slowly get more dense adding notes until it’s at its fullest with the Full Moon. Together, the music and the movement will create an ever changing experience encouraging participants to return and witness the progress of the piece.

July 14th-23rd  Sun Boxes will be at The Delaware Art Museum.  CUBEMUSIC will also be presented as well as some live performnaces.  There will be yoga and or Tai Chi amongst the boxes every day.

The Short film, by Kevin Belli, INSTALL: Sound, Light & Craig Colorusso will be shown through out the 10 days.  Here’s the TRAILER

We’re heading back to the Commonwealth. Sun Boxes will be at Mass Moca May 27th-28th as part of Earworks II. The Sunnies will then spend some time at Mass Moca for the month of June.
June 9: Colegrove Park (24 Church Street, North Adams)
June 16: Colegrove Park
June 23: Solid Sound, MASS MoCA’s Courtyard A 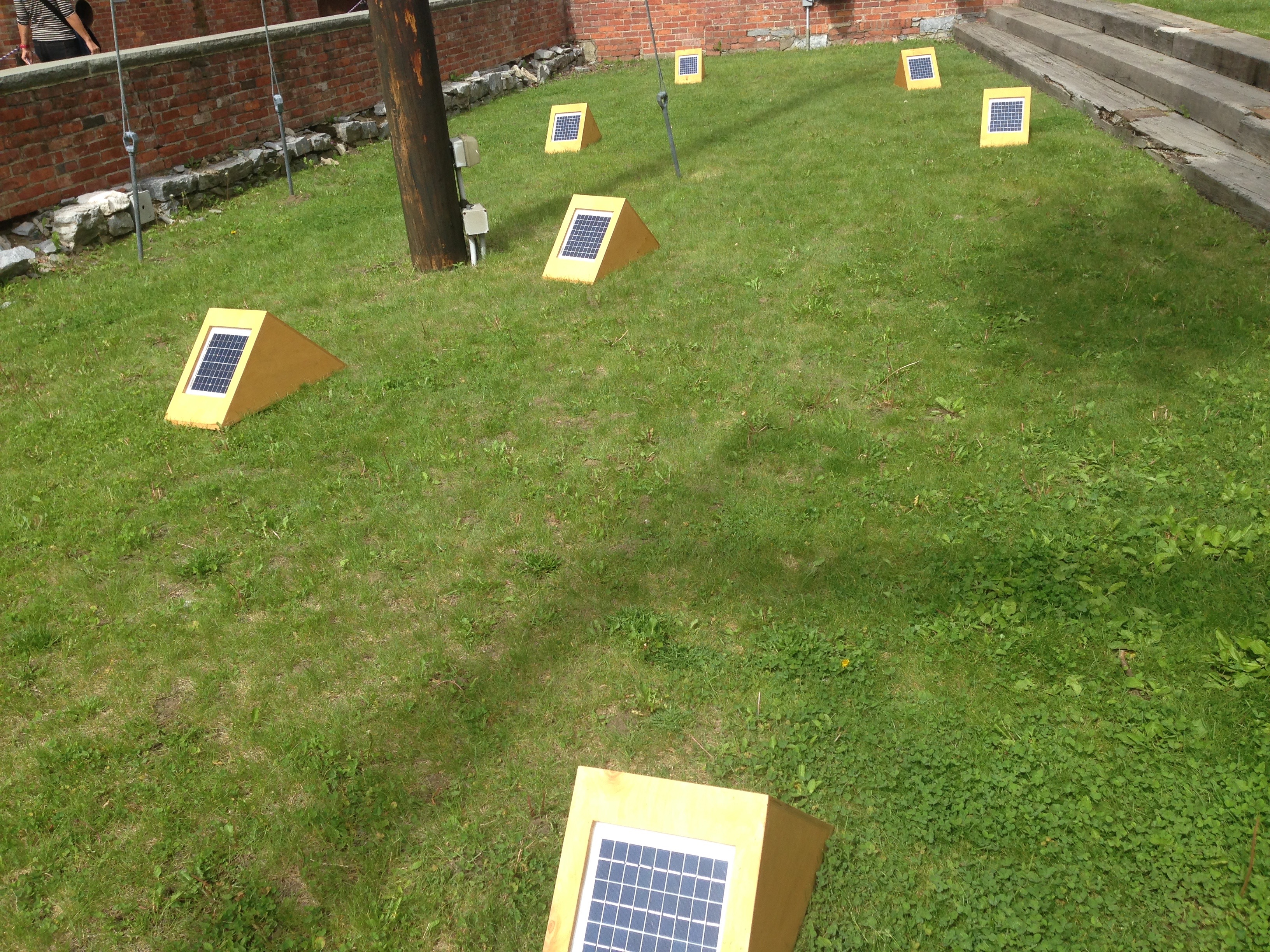 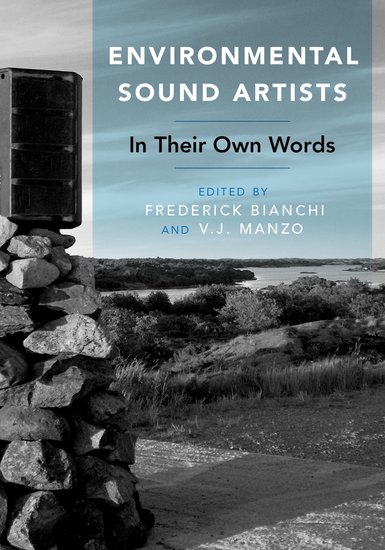 Honored to be part of this book with an essay on Sun Boxes.

Edited by Frederick Bianchi and V. J. Manzo and to be published by Oxford University Press on August 25 (July 12 on Amazon), Environmental Sound Artists is a new book exploring traditional and novel issues around the art of environmental sound:

Environmental sound art is especially relevant because it addresses political, social, economic, scientific, and aesthetic issues. As a result, it has attracted the participation of artists internationally. Awareness and concern for the environment has connected and unified artists across the globe and has achieved a solidarity and clarity of purpose that is singularly unique and optimistic. The environmental sound art movement is borderless and thriving.

Here are some links of the authors: